The most feared Decepticon … a leader seeking peace through tyranny … he is Megatron!

Megatron combines brute strength, military cunning, ruthlessness and terror. Aches to return to Cybertron to complete the Decepticon conquest, but only after destroying all Autobots on Earth. Plans to possess all of Earth’s resources. Incredibly powerful and intelligent. Fires particle beam cannon. Can link up interdimensionally to a black hole and draw anti-matter from it for use as a weapon. No known weakness.

It’s about time I show some Decepticon love on this blog and what better Transformer to start with than their leader, Megatron. From the moment I opened this figure up and gripped the Walther P-38 alt mode, I knew just how powerful, nostalgic, and absolute fun the G1 figures truly can be. There will NEVER be another Transfromers toy quite like Megatron. As mentioned, his alt mode is a Walther P-38 pistol; that’s an actual pistol that was used during war times. It’s almost hard to believe, given the times we live in, that this toy was on the shelves of retail stores at one point where any kid could buy him. Now it’s become increasingly difficult to obtain this figure without having the orange safety cap modded onto the gun tip. I originally purchased the Takara book-style reissue of Megatron with the orange cap in hopes of removing it with ease … it wasn’t so easy for me. However, I managed to remove the top portion of the cap and will remove the remaining portion when I have a proper drill bit. I loved the figure so much though that I decided to purchase a second Megatron (the Encore version) without the orange tip and kept it completely void of stickers; a more realistic look in my opinion. For this entry, I’ll review my sticker version to show off a more toy friendly look, which is what I feel I would have done back in 1984.

Seriously, how can you not like this alt mode? From the moment I picked it up I felt downright cool; I felt like I was Starscream wielding Megatron in battle against the Autobots causing nothing but damage! This toy has so much play value in it I can’t imagine the figure ever staying on the shelves for too long. The basic mode is simply the pistol, which I could stop there and be happy enough. Instead, the figure has an attachable scope, silencer, and stock … not to mention an actual firing mechanism! You can load small pellets into the pistol mode and fire! That’s unheard of in today’s toy market. Every bit of fear and power the Megatron character displayed in both the cartoon and comic books is captured so well in this figure’s alt mode. I’ll let the pictures do the talking! 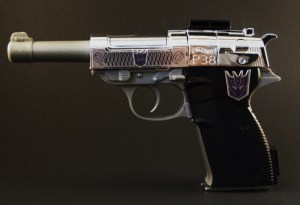 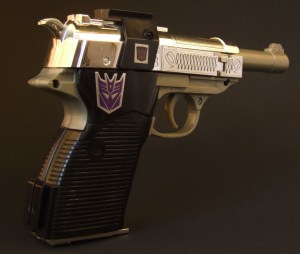 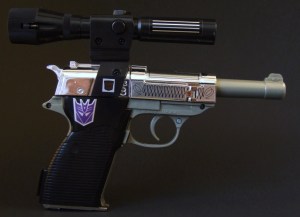 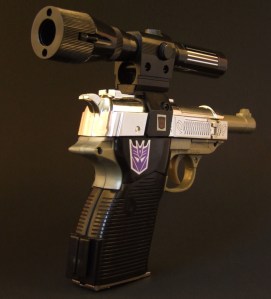 My fiance was nice enough to lend a hand 😉 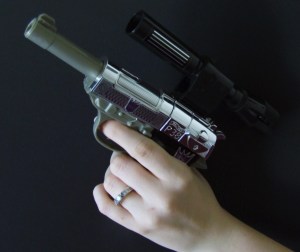 The transformation is a little quirky. The back of the gun is where the most happens. To start, you have to peg the arms out and rotate them around and forward to its final spot. The chest is also a really nifty transformation – it actually slides up to reveal more torso and then it also rotates to its final spot. The head of Megatron is then pulled up to rest on top of the chest. His legs are pretty simple compared to the top half – all you do is essentially split the legs from the gun handle, slide out his feet, and then position the lower half in a number of different ways. Very involved transformation, but it’s still a fun and easy process once it’s been done a few times.

The Walther P-38 alt mode is downright cool and Megatron’s robot mode is everything its equal. Megatron’s robot mode isn’t the most aesthetically pleasing figure with his trigger crotch and somewhat awkward proportions, but it’s got some serious play value with it’s plethora of options.  Once in robot mode I understand better where the term “Buckethead” came from; it literally looks like there’s a bucket on his head. Robot mode though, is fantastic. Similar to the alt mode, I would have been more than happy as a kid having just the robot itself and silencer (the silencer is used as Megatron’s iconic fusion cannon) attached to Megatron’s arm. However, this figure’s fun doesn’t stop there. You can take Megatron’s silencer, fusion cannon, and stock, combine them together and make a crazy looking, intimidating cannon! Even more, you can also combine Megatron’s accessories into a shoulder mounted laser cannon! This is by far my favorite mode as it makes Megatron looked beefed up and ready to shoot at any Autobot that crosses his path.

Megatron’s accessories are a huge reason as to why this toy is so awesome. All of the accessories have multiple purposes and all of them interconnect with each other. It doesn’t matter in what way you use them because each mode is just as fun as the other. There’s really not too many modern day Transformers that have useful accessories the way Megatron does. 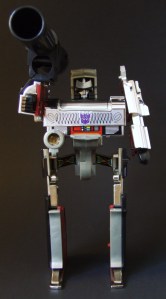 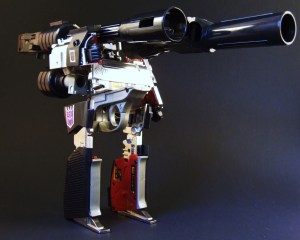 Fiddling around with this figure I’ve really grasped a deeper appreciation for G1 Transformers toys. Megatron is a perfect example of what kids and collectors alike will never see on retailers’ shelves. He is a perfect blend of nostalgia and history in today’s toy world. In 1984 I am certain he was the perfect blend of fun and excitement for any lucky kid to have him. This figure really is a representation of what use to be and sadly he’s now the poster child of what never will be again. Just as Megatron was an iconic and unforgettable character deserving of Hall of Fame recognition, Megatron’s toy is just as memorable. 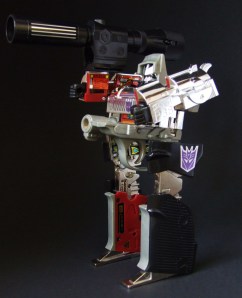 11 comments on “Where’s the orange cap?”