Sunstreaker – “They can’t beat the best.”

The complete egotist, Sunstreaker thinks he is the most beautiful thing on Earth. Loves his sleek styling, contemptuous of other Autobot race cars (particularly his twin, Sideswipe). Fires laser-guided ground-to-air rockets and high energy electron pulses at 300 bursts/sec. Tough polymer-steel skin resists artillery. Not a team player. Can be baited into dangerous situations, but is a very calm, competent and ruthless war machine.

Sunstreaker has a lot of history to him and I’m finding out more about this toy every time I punch him into a Google search. Above all other interesting facts about him, the coolest and most important thing to take note of is Sunstreaker being recognized as the first transforming car-to-robot toy ever designed. Wow. Think of the history and importance of that. Designed by long time Takara-Tomy toy designer, Kōjin Ōno, Sunstreaker is without a doubt a fan favorite character and arguably the most historic one. Ever since BotCon 2010 when I had a chance to listen to Kōjin Ōno speak about Sunstreaker and his other toy designs, this is a figure that I have been drooling over. 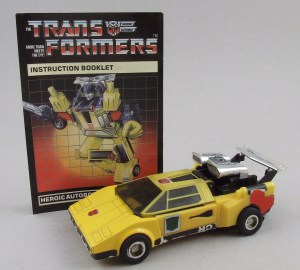 More often than not I’m finding myself very drawn to the alt modes of the Generation 1 figures; and damn is Sunstreaker no exception. Sunstreaker’s alt mode is a Lamborghini Countach LP500S, I guess it’s a very customized one at that. It’s gorgeous. I’m a sucker for a good yellow and black deco (my friends give me shit for my Movieverse Bumblebee collection) and Sunstreaker uses this paint job to its fullest potential. It’s not just the deco that has me in love with this alt mode either:

Sunstreaker’s alt mode, bottom line, is nothing short of a standout. The play value is there as a real-world car, but beyond that it’s more of a collection attraction. I normally don’t display my Transformers in their alt modes, but Sunstreaker’s alt mode is going to force me to buy a second figure for this purpose alone. 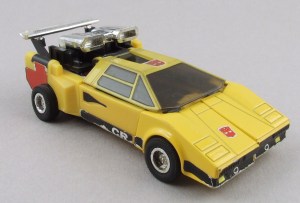 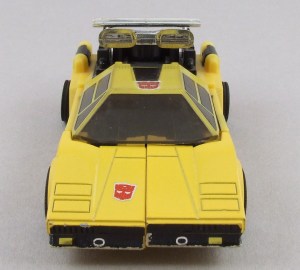 My stickers are a little beat up on this. Reprolables might be in need. 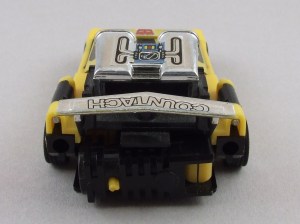 The engine and spoiler are slick looking. The chrome and stickers compliment each other perfectly.

The opening “cockpit” is beautiful. There’s wonderful molded detail inside as well as a driver’s seat. 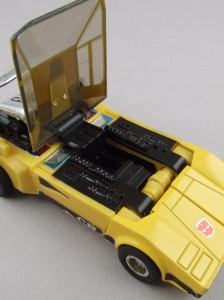 Sunstreaker has a pretty involved transformation. A lot of parts need to move around in order to get him to his robot mode. The cool thing about the transformation is you can start it a few different ways, but I tend to always start with unfolding his arms since it tends to be the trickiest. His arms are folded 90 degrees under his engine and they needed to be rotated and folded out and then have his shoulders rotated forward as well. The front end of the car slides out to become his feet, while the front portion of the car is pulled out to become his legs. The cockpit is where the most movement comes from. The entire engine block, windshield, driver’s seat, and spoiler are flipped back and through to reveal Sunstreaker’s head. From there all you have to do is make sure everything is snug, insert your fists/missiles/ or “boosters,” and you’re complete! A very fun transformation with a lot of movement going on.

Sunstreaker has probably one of the most complete and proportional robot modes in the G1 line. I can make an argument that his arms are too long, but the ability to interchange his fists with missiles and “boosters” really makes up for that. Sunstreaker comes with two fists, three missiles, and two “boosters” that you can also fit on top of his shoulders to add more flare to him. One big issue that I have with him though, is his balance. Unfortunately if you do not adjust his feet in the ideal way you’ll find Sunstreaker doing a bit of a lean back (You’ll actually see this in some of the side view pictures below). His wheels sit a little too low in robot mode, so you have to be particular in the feet adjustment to make him stand straight up.

A great thing to note is the awesome, AWESOME, jet pack on Sunstreaker’s back (the jet pack itself has a great story attached to it). The engine from alt mode carries overly beautifully here and you’re able to see the jet pack sticking slightly up behind his head. It really just adds a lot of play value to the robot mode, but also is a great addition to the overall appearance.

Beyond those highlights, it’s really just nice to see so much detail in a figure. From the stickers inside his chest featuring some Cybertronian tech, to the molded detail on his shins, there’s a lot to admire in this toy. It’s honestly hard to capture every little detail in pictures …

Interesting to note – the black piece on Sunstreaker’s back often goes missing from loose samples of this toy. 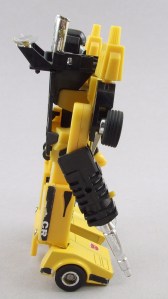 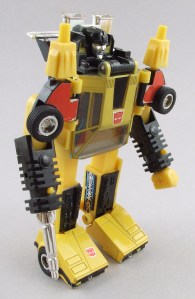 Headsculpt has a lot of “human” features to it. Really like how approachable he seems.

I’ve honestly always had a love/hate relationship with the Classics Sunstreaker mold. I enjoy the way it looks, but I’ve never loved it as a toy and its transformation. After buying the G1 Sunstreaker and playing with him for awhile, I feel even more distant from the Classics Sunstreaker. Don’t get me wrong, I think it’s still very much a suitable updated figure, but it doesn’t capture some of the best things about the Generation 1 toy.

For starters, the alt mode just isn’t as dynamic as its G1 predecessor: the engine block isn’t as exciting, the spoiler seems smaller. I won’t comment on the stickers and detail because that was probably limited to licensing issues, but I do know the Henkei has chrome with some more detail and there is also always a Reprolables upgrade set.

As far the Evolution of the robot mode, this is where it’s at for a solid comparison. The colors blend very well from one generation to the next. You’ll see in the pictures below a good amount of carry over detail (note the red in the shoulders in particular). They also share a very similar head-sculpt as well. If there is one thing I want to see done well in the Evolution, it’s the shared head-sculpt.

Overall, I have so much more of an appreciation for G1 Sunstreaker after comparing this Evolution. I definitely have more of a desire to upgrade my Classics Sunstreaker to fit the G1 feel a little more. 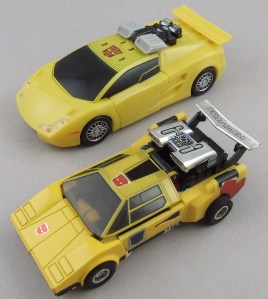 The alt modes are two entirely different vehicles in my opinion. 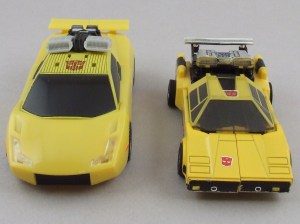 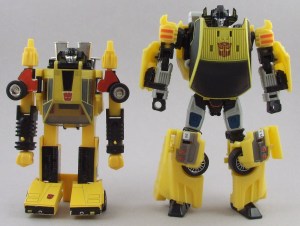 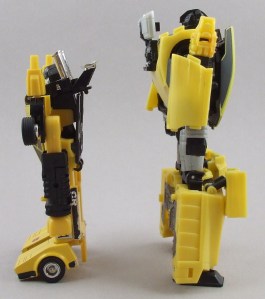 Very nice headsculpt across the Evolution.

I really, really like Sunstreaker, especially his alt mode. It’s a very unique figure and I want to say he doesn’t share his mold with any other character in the main line. Because of that alone it’s a great reason to own this toy. However, the attention to spectacular details (like his chromed engine) and the play value (interchangeable fists, opening “cockpit”) gives this figure several more reasons to pursue a purchase of Sunstreaker. He’s becoming increasingly difficult to find in good condition and even has a knock off floating around, so be patient for the right one. But when you find him for a good price, pull the trigger! This figure is hard to beat among the Autobot car ranks.

that explains the red shoulders

9 comments on “Sunstreaker – “They can’t beat the best.””